Derek McInnes made two changes from the opening day draw with Aberdeen, leaving out Chris Millar and Liam Craig in favour of Kevin Moon and Marcus Haber.  Moon began on the right of midfield with David Robertson on the left.  Haber formed a striking partnership with Cillian Sheridan.
Ally McCoist was without the injured Davie Weir so Dorin Goian was handed his debut.  Other than that it was the same personnel but in a different system for the SPL champions.  The three at the back set up was ditched from the mid-week Malmo tie, with Sasa Papc deployed in an unfamiliar left-midfield role.  Maurice Edu was used on the right, meaning that Steven Davis could take up his favoured central-midfield position.. 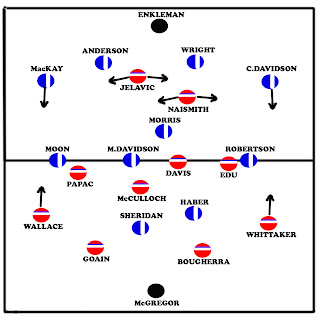