Following all the off-field nonsense this past week or so, a football match took place.  In it, a fantastic performance from Allan McGregor in the Rangers goal, capped by an eighty-third minute penalty save, ensured that Rangers took a point.  Nonetheless it is Celtic who will be the happier of the two sides as it means that winning the SPL title is now firmly in their own hands. 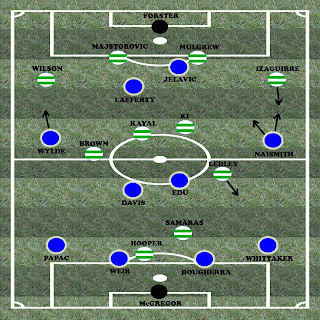 Given the significance of the match, it was a predictably cagey affair with both sides set up not to concede.  Both sides set up as 4-4-2, although their respective deployments were slightly different, especially in midfield.  Neil Lennon opted for Joe Ledley ahead of Kris Commons and Ki Sung-Yeung in favour of James Forrest, admitting beforehand that this was designed to make the midfield more robust.  They started with a narrow and mostly deep-lying midfield four.  Ledley was the most likely to get forward from midfield and tended to drift out wide left.  As is customary in Old Firm matches, Georgios Samaras made a rare start at the expense of top scorer Antony Stokes.
Walter Smith, in what was his final Old Firm derby, made one change from the 4-0 defeat of Dundee United in midweek, dropping Kyle Hutton in favour of Greg Wylde.  The Rangers midfield included Steven Davis and Maurice Edu in the centre, who sat relatively deep, and two wingers in Wylde and Steven Naismith, although the two of them rarely got beyond Emilio Izaguirre or Mark Wilson.  The other main difference between the two line ups were at full-back.  Whereas Celtic’s were expected to get forward, whether they were successful or not in doing this, the Rangers full-backs opted to stay back and allow those in front of them to do the attacking.

Rangers direct while Celtic focus on keeping possession
Rangers had the better of the opening exchanges with Kyle Lafferty, playing as a second striker just off Nikica Jelavic, looking lively.  After around ten minutes, when the match settled and Celtic began to keep possession, Rangers then opted to sit deep, hit Lafferty with long diagonals when they regained possession and feed off knock-downs.
It was a shame that Rangers resorted to this tactic.  Midway through the each half they exhibited their ability to put together quick passing moves that involved Jelavic.  The Croatian international has shown his capacity to link up and bring others into play in recent weeks but Rangers didn’t utilise this nearly enough during the ninety minutes.

Celtic, on the other hand, were intent on keeping possession and forming triangles to pass around the Rangers midfield.  It seems that this is why Lennon opted for players like Ki, who is excellent at keeping possession and creating from deep, and Samaras, who provides a link between midfield and attack, when he is on form that is.  The trouble was that Samaras was poor throughout, even if his manager and captain described him as “brilliant” after the match.
Despite both sides having a spells of dominance, nothing clear cut was created in the first half.  Scott Brown had a decent effort that was wide of the target and Naismith fired wide from a tight angle shortly afterwards.

Second half
The start of the second half was more of the same, Celtic dominating possession and Rangers hitting long diagonal balls towards the forwards.  Rangers should have opened the scoring when Lafferty headed wide from a deep Wylde cross.