*This article initially appeared on The Terrace Scottish Football Podcast's website. Check out their podcast (as well as lots of other great content) which starts tomorrow.

St. Johnstone Chairman Steve Brown’s first managerial appointment of his tenure was slightly against the grain to those of his predecessor and father. Whereas Geoff Brown, more often than not, gambled on inexperienced coaches, giving over half of his choices their first taste as the sole man charge of a professional football club, Chairman Brown Jr. decided to promote from within, replacing the departing Steve Lomas with his slightly more experienced assistant, Tommy Wright. Despite this also being the former Northern Ireland international’s first managerial role of a professional club (he managed at semi-professional level in his native land, as well gaining several years of experience as a goalkeeping coach in England and Ireland), Wright is older than all but one of Geoff Brown’s nine appointments and has at least ten years on each of the last three Saints managers - all at the time of their respective appointments, of course. 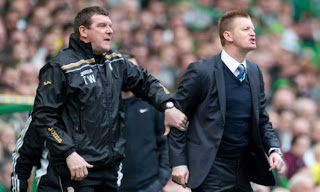 If the current chairman estimates that his father is going to be a tough act to follow, he should spare a thought for the new manager who is expected to do what the three most recent St. Johnstone managers have achieved, and that is build upon the good work of their respective forbearer. Owen Coyle was able to stabalise the club after a turbulent few years and may have achieved promotion in 2007 were it not for the lavish spending of Gretna, not to mention a last-minute goal from James Grady. After departing for Burnley, Coyle was replaced by Derek McInnes who secured promotion during his second season in charge, before going on to establish St. Johnstone as SPL regulars once more.

The curse of a successful management team struck once again when English clubs began to take an interest in McInnes. He eventually left for Bristol City and was replaced at McDiarmid by another first-timer, Steve Lomas. Coincidently, the day Geoff Brown announced Lomas as manager was the day he signalled his intention to step down as chairman of the club and pass his stewardship on to his son. Lomas led St. Johnstone to the top six in consecutive seasons, including their most recent third place finish in May, earning them a shot at the preliminary stages of the Europa League. Predictably, this feat led to yet another English side turning to St. Johnstone for their next manager, making Lomas the third head coach to leave McDiarmid for the English Championship in less than six years.

Shortly after his promotion, Tommy Wright’s task was made all the more difficult when Murray Davidson (though the central midfielder has since rejoined), Gregory Tade, Rowan Vine and Liam Craig, all key components of last season’s success, left the club under freedom of contract. The quartet was amongst the club’s six top scorers last season, with a combined total of 29 goals - including 27 of the side’s 45 league goals. Furthermore, what remained of the team was rewarded for last season’s achievements by having their holiday ended prematurely in order to prepare for an extremely difficult tie against a side with the European pedigree of Rosenborg.

Any supporter of the Scottish game could be forgiven for being a pessimist regarding Saints’ chances, but Wright and his side proved those doubters wrong by shocking the Norwegians into a 1-0 home defeat, before coming from behind to earn a 1-1 draw at McDiarmid Park. They did so by employing similar principles to that of Lomas and McInnes before him: a strong, organised defensive unit, first and foremost, with some decent ball players in the middle of the park, along with a few creative outlets in advanced areas.

It was one of those outlets, in the form of new recruit David Wotherspoon, who provided the assists that ensured St. Johnstone would be lining up against Belarusian side Dinamo Minsk next week. The attacking midfielder flattered to deceive at Easter Road for a number of years before finally moving on this summer. It was his corner in the first leg, and clever first-time ball in the second, that allowed Frazer Wright and Stevie May to score the goals that clinched progression to the next round. The hope now is that Wotherspoon can build upon his impressive start and become the player he has promised to be for so long.

The Hibernian graduate isn’t the only decent signing to arrive in Perth this summer. Brian Easton has proved a top performer in the two stints he’s had at SPL/Premiership/What-are-the English-calling-it-now-so-we-can-copy, whereas Gary McDonald brings a wealth of experience from stints both north and south of the border. Gwion Edwards, who impressed during a loan spell at McDiarmid last season, returns to and seems a promising acquisition. Added to these are Steve Banks and Rory Fallon, the former of which has been brought in to provide back up, while Fallon must improve on his Pittodrie performances if he is to avoid a similar fate.

It is, of course, too early in the day to declare any of these signings, or the recent managerial appointment, a success, despite the heroics of the last two Thursdays. Though if those two matches are anything to go by, it would appear that shrewd managerial appointments runs in the Brown family, and that Wright will be every it a success as those who have come before him. It is at least safe to say that, on a night where Pat Fenlon was forced to apologise for a Scottish club’s worst ever showing over two legs in Europe, Tommy Wright’s St. Johnstone were the talk of the nation’s football contingent with a result that will go down as one of Scotland’s finest: A 2-1 aggregate victory over a side with an annual budget eighteen times the size of theirs, and who were recently a regular in the group stage of the UEFA Champions League.
Posted by Craig Cairns at 10:45