With the removal of the Glasgow derby from what turned out to be the final SPL season, a lot of the television marketing weight was put behind its Edinburgh equivalent to compensate. Instead of emerging as the most anticipated fixture, it bored its audience to the point where its future presence on television was dreaded. Far greater entertainment was provided from the enterprising football of Stuart McCall’s Motherwell, the unyielding St. Johnstone and the rise of the Highland clubs. 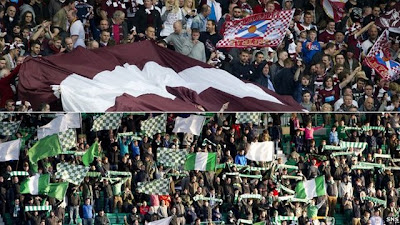 The final Edinburgh derby of the 2012/13 season produced three goals - fabulous strikes from Leigh Griffiths and especially from Ross Caldwell cancelled out Darren Barr’s earlier whatever-that-was – but the previous two had ended goalless and followed a middling encounter from early in the season. Overall the fixture contributed only five goals across four SPL meetings and not enough quality to justify the hype. I will be finding it difficult not to cringe during the live TV coverage when the inevitable cheesy promotional reel that precedes the punditry hopelessly attempts to build the match up this time around.

Hearts scored only 40 goals last season, with 10 of them coming in the final six matches. In football parlance, that would usually indicate some goal-scoring form worth mentioning, however, the Hearts squad has since regressed and is currently strikerless. Ryan Stevenson and Callum Paterson are the two tasked with filling the void, but Hearts supporters have seen enough of both in that position – even if, admittedly, less so of Paterson -  to not be too optimistic about these options.

That’s not to say that neither will find the net, just that it is doubtful whether either can be prolific enough to satisfy Hearts’ needs.  A friend of mine swore that one of them had possession in the St. Johnstone penalty area last weekend but it didn’t make the Sportscene highlights, so it’s unconfirmed on my part. Almost every outfield player in Hearts’ diminutive first-team squad is required to produce at least a goal or two if they are to overcome their fifteen point deficit and get anywhere close to the league’s other sides.

But since the fixture list was released, Gary Locke will have had an eye on Sunday’s match knowing it would be an ideal opportunity to fire-up his players, sneak a result and embark on the run that will ultimately give them a chance of survival. And the earlier the better because if the Tynecastle club fail to and if a season such as the preceding one unfolds – Dundee aside, but there are reasons for their poor showing – every other club will be too far away by the time they reach zero.

Things aren’t looking much better, form wise, down at Easter Road though they will also see Sunday as a potential catalyst for a decent run of form. Hibernian will be looking to put their early season mauling at the hands of Malmö and their uninspiring season opener at home to Motherwell behind them. A derby victory to rub salt into the wounds of a bleeding Hearts would certainly aid that.

Goals have been an issue for Pat Fenlon’s side as well - three games, no goals so far this season - but this weekend will be the first time he has both Rowan Vine and James Collins to choose from. Vine proved dangerous cutting in from the left side for St. Johnstone last season and Collins already displayed some potential during his debut. What’s more, the away side go into this match as favourites both in terms of recent form in this fixture and when assessing the respective starting staring elevens.

Pressure can often work against you though, even more so when fierce rivalry is involved. A converted Derek Riordan penalty earned a makeshift Hibs side, containing Steven Thicot and an expiring Ian Murray at central defence, a 1-0 victory against an in-form Hearts side at Tynecastle in 2009 and the current team will be hoping that a similar upset, albeit in their disfavour, doesn’t occur.

If the unthinkable happened and Hearts were to snatch an unlikely victory then time may be called on Pat Fenlon’s career at East Road. His win percentage is dangerously close the other Hibs managers that have been forced out the exit in recent years and this added to the poor showings at two Scottish Cup finals, not to mention a record defeat in Europe for a Scottish club, would be deemed inexcusable by many if it culminated in defeat at Tynecastle.

For many but not for all, however, as these days the Hibernian support is split into two opposing camps during their bleakest periods: those who blame the manager and those who blame the chairman for appointing the wrong man and/or not backing his choice sufficiently. Fenlon could perhaps point to not being afforded adequate time thus far but cannot complain about a lack of finances, as in a period of severe austerity for Scottish football Hibernian have spent somewhere in the region of £200,000 on Collins as well as a nominal fee on Bradford defender Michael Nelson.

Other proponents of sticking by the manager would point to the proverbial gelling of the squad being in its rudimentary stages and that changing manager directly following pre-season is counterproductive. The performances of the new recruits at their previous clubs suggest that given time they will strengthen the squad and assist the club in beginning to climb the league. Giving Fenlon until later in the year would allow his new signings to settle and begin hitting the form that attracted their attention in the first place.


The smart money for this match is that neither seizes the moment and that a dour, low-scoring draw that does nothing to help either side awaits. Failing that a narrow victory for either side is expected, with Hibernian the most likely. It is possible, however, that the negative angle of this piece was misguided from the start. It’s a new season with all new, yet chored, branding and with yet another new dynamic surrounding this Edinburgh derby. It may just surprise us all and throw up a spectacle that we had previously come to expect from this fixture when it lurked in the shadows of the Glasgow derby.
Posted by Craig Cairns at 20:08