SPL Team of the Season

An SPL campaign in which the actual football rarely hogged the headlines saw a departing Walter Smith lead his threadbare Rangers side to the title.  The eleven players below are predictably dominated by Old Firm players who once again were streets ahead of their rivals.  You may wonder, given the eventual champions, why there are five representatives from Celtic and only three from Rangers.  The answer is that Celtic played the better football throughout the course of the season.  Rangers ground out results a bit more, apart from towards the end of the season when they pretty much blew everyone away, and their play was overall more reactive than Celtic’s, although not exclusively so.

Before proceeding I should mention a few players that were unlucky to miss out.  There were two positions that were extremely difficult to decide upon – goalkeeper and striker.  Allan McGregor could just as easily been selected instead of Marian Kello.  His penalty save in the final Old Firm match of the season was a major factor in Rangers winning the title and he also saved his side on a number of other occasions.  Despite this, I have opted for Kello for the reasons given below.  The other player that was very difficult to leave out was Gary Hooper.  Nineteen league goals in twenty-five league matches is a fantastic return for his first season in the SPL, however, I feel that Nikica Jelavic’s overall contribution trumps that of Hooper, more on this below.
Some may also be disappointed not to see any Dundee United players represented.  They had a tremendous second half to the season after the return of Craig Conway and Danny Swanson from injury.  Although highly influential, these two did not quite perform consistently enough to warrant a place and the other candidates – David Goodwillie and the central midfield three – are worth a mention but unfortunately cannot be included at the expense of any of those selected. 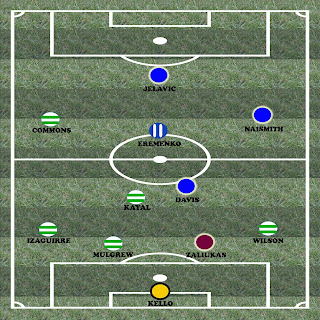 SPL Young Team of the Season

Here's my (undescribed) SPL young team of the season also.  Honourble mentions go to Johnny Russell of Dundee United and Gregg Wylde of Rangers who both narrowly missed out. 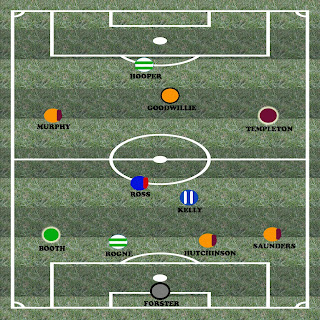