Scotland made four changes from the victory over Wales on Wednesday.  James Morrison and Gary Caldwell missed out through injury while Ross McCormack and Stephen Crainey were dropped to the bench.  In came Barry Robson, Phil Bardsley, James Forrest and Grant Hanley.  This meant a slight change in shape.  Steven Naismith moved into a more central position just in behind Kenny Miller, which meant that Robson and Forrest took up wide roles.  The result was a 4-2-3-1 shape, a slight modification from the 4-1-4-1 that Craig Levein has favoured recently.
Giovanni Trapattoni also made four changes to his starting line up.  In came Darren O’Dea, Liam Lawrence, Keith Fahey and Stephen Hunt for Damien Delaney, Keith Tracey, Seamus Coleman and Kevin Foley.  Their shape was largely 4-4-2 although Hunt tended to play a tucked in role to help out in the centre of midfield and Simon Cox would drop off to link play, leaving Robbie Keane to play on the shoulder of the last defender. 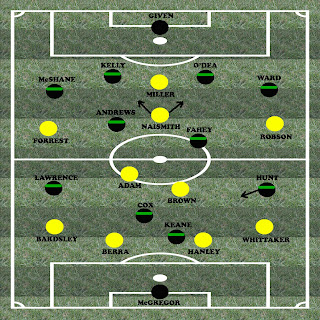 The first ten minutes were dominated by the hosts, who either looked to hit balls towards Cox, who would drop deep to link play, or in behind the defence and use the pace of Keane.  The problem was that Scotland kept a deep defensive line, denying space for Keane to exploit.
After that Scotland began to dominate possession and put together some decent passages of play without creating many clear-cut chances.  Their best attempt at goal came from a goal-bound, long range effort from Bardsley that was tipped onto the bar by Shay Given.
Despite Scotland’s dominance it was Ireland who took the lead through Robbie Keane.  Paul McShane intercepted a Scott Brown pass and drove forward, feeding Keane around the halfway line.  Keane was allowed to run from the centre circle to the edge of the box unopposed as Hanley’s inexperience showed.  Keane’s strike was poorly dealt with by Allan McGregor who really should have saved.  It was a well taken goal from the Irish captain although, from a Scotland perspective, the fault lies with at least three players.
Up to that point Charlie Adam had been the deeper of Scotland’s two holding midfielders, although whenever the Blackpool talisman broke forward Brown would provide cover.  After the goal, Adam became the more advanced of the two with Brown more focused on defensive duties.  A similar switch was made in the match versus Wales when Scotland found themselves a goal down going in at half-time.
Scotland continued to enjoy more of the ball but still struggled to create.  There were two things that stood out compared to their two victories earlier in the tournament.  Firstly, Adam and Brown had pretty poor games overall.  The pair misplaced far too many passes and they, along with Naismith just ahead of them, should really have done better against the central midfield two of Ireland.
The second factor regards the nature of the wingers.  Against both Northern Ireland and Wales, Naismith began on the right with Kris Commons on the left in former of the two matches, McCormack in the latter.  In both those matches, even though their starting positions were wide they would often break forward when their side had possession to form a front three with Miller.  This allowed the full-backs the space to overlap, something they failed to do at all in the first half last night and very seldom in the second.
Relatedly, Naismith is much more effective when starting on the right drifting inside than when playing just off the striker.  This is something Rangers manager Walter Smith identified and rectified at half time in the League Cup final in March.  The problem last night was that Naismith’s movement was much easier to track: When he stayed deep he was picked up by either Fahey or Keith Andrews and when he positioned himself more advanced he was marked by one of the central defenders.
Second half
The second half began similar to the second half with Ireland exerting more pressure on the Scotland defence.  This time their dominance was a bit more sustained but after twenty minutes or so it became clear that they were happy to gamble on protecting their lead.
This meant that Scotland began to enjoy more of the ball once again.  This time they managed to create a number of chances but unfortunately were not clinical enough in front of goal.  As the match entered the dying stages, Scotland’s play became more hurried and they displayed a distinct lack of composure in front of goal.  Both Naismith and Miller passed up excellent opportunities to level the scores.
Both sides made three substitutions each but the only one of the six that really made a difference was when a struggling Darren O’Dea was replaced with Kevin Foley, which meant that McShane moved into the centre alongside man-of-the-match Stephen Kelly.
Conclusion
After the match Levein insisted that his side deserved to win the match.  It is certainly true that Scotland enjoyed more of the ball, passed the ball about better and created more chances, however, most of their opportunities were rushed and in the final twenty minutes and they were not clinical enough in front of goal.
Other than poor finishing, Scotland’s downfall was down to the set-up of their midfield five.  Robson and Forrest were deployed as inverted wingers although Robson only managed to cut inside and whip in an inswinger on two occasions, both in the first half, and Forrest stayed out wide and didn’t see much of the ball at all.  The knock on effect was that Scotland’s full-backs rarely got forward.  Furthermore, Naismith was marked out of the match and not nearly as effective as when positioned on the right.
Looking at the tournament as a whole, and the progress of the Scotland squad overall, things are looking promising for Levein.  His side now look far more capable of attacking than they have in recent years and still have some key players missing, most notably Darren Fletcher, Steven Fletcher and Alan Hutton.  The main worry is that Levein will now have to wait until September, after the domestic campaigns are underway, to get his squad together for a competitive match.
Posted by Craig Cairns at 01:23