Rangers celebrated Craig Whyte’s recent takeover with a comfortable 4-0 win, opening up a four point gap over their closest rivals Celtic.  Hearts started the match well but capitulated in a five minute period before half-time which ended the match as a contest. 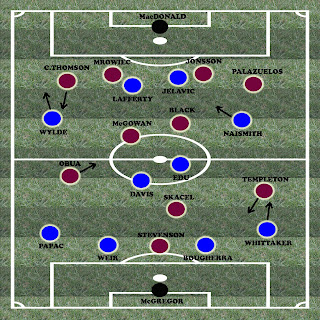 Steven Davis was excellent yet again for Rangers, he has had a tremendous second half to the season, and dictated play when Rangers were on top.  The front two of Rangers also deserve a lot of credit.  When there was little space to drop off into, they moved wide and worked the channels in order to bring others in to play.  The two seem to have struck up a good understanding and Jelavic seems to bring the best out of Lafferty, who is only now beginning to justify the large amount of money Rangers paid for him three years ago.
Posted by Craig Cairns at 10:12