Scotland completely dominated and ran out worthy winners against Northern Ireland in their opening match of the Carling Nations Cup on Wednesday night.  Craig Levein opted to field a striker this time in a 4-1-4-1 formation that pressed their opponents high up the pitch at every opportunity.  Northern Ireland were happier to sit off and allow Scotland to have possession.  They lined up as a 4-4-1-1 with Steven Davis on the right of midfield, as opposed to the centre, and Paddy McCourt just off Rory Patterson in attack.

James McArthur was a late replacement for Scott Brown after an injury during the warm up. 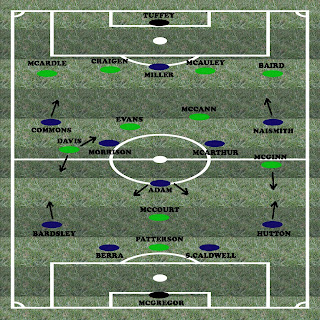 Northern Ireland began the better in a scrappy opening five minutes which saw both teams hit direct passes from defence.  After this initial period, Scotland began to settle and pass the ball around well.  Charlie Adam had been deployed as a deep-lying regista and, along with both full-backs, was dictating play.  One thing that stood out throughout the match was the space he and his second half replacement Barry Bannan were given.  Off the ball they were always in space and with possession they were not closed down and allowed to pick a pass.
Scotland’s pressing was so relentless in the first half that Adam even found himself charging down Northern Ireland goalkeeper Jonny Tuffey at one point.
For Northern Ireland, McCourt attempted to drop deep and link up with Davis and McGinn but the combination didn’t bear much fruit.  One chance for McGinn, after a McCourt through ball, was saved comfortably by Allan McGregor on ten minutes but other than this there was very little to trouble the Rangers goalkeeper.
Northern Ireland then pushed Corry Evans wide, moved Davis inside and looked to focus their play through him.  They put together some nice passing at times but did so without causing any problems for the Scotland defence.
Kenny Miller missed his first opportunity of the match on fourteen minutes but was on hand to give the Scots the lead five minutes later.  James Morrison won a corner on the left which was taken by Adam.  His outswinger was headed into the goalmouth by Phil Bardsley, who had peeled off the front post unmarked, and Miller stabbed home from two yards after the ball had bounced off Steven Craigen and Grant McAuley.
Scotland should have led 2-0 minutes later when Stephen Caldwell sent a free header over the bar after another excellent Adam delivery from a corner and Kris Commons had his shot blocked after he, Bardsley and Morrison linked up well on the left.
The more Scotland dominated, the more they got their full-backs forward and joining in with play which meant that they always had a man free in the middle third.  Added to this, the movement and pace of the Miller, Commons and Naismith – which became a front three in attack – and towards the end of the half, Scotland looked like this when in possession:

Scotland’s formation was not as rigid as Northern Ireland’s.  Morrison and McArthur would interchange and Commons and Naismith would often drift inside, allowing overlapping runs from the full-backs, and form a front three with Miller.
A McArthur cross eluded Tuffey in the Northern Ireland goal on thirty-two minutes to give Scotland a 2-0 lead.  The ball was intended to be hung towards the back post for Miller, was inaccurate and sailed into the top corner.  The Wigan midfielder, making his first start for the national side, admitted as much post-match.
The half ended with Scotland still completely dominating and chances from both Morrison and Bardsley were dealt with well by Tuffey.
At half time Nigel Worthington switched Northern Ireland to a 4-4-2, bringing on David Healy for midfielder Grant McCann and withdrew Rory McArdle, who had a torrid time trying to keep up with Commons, for Lee Hodson.
Notably, Healy's first action was to chase down a full-back, something the team had failed to do in the entire first half.  He instantly improved things for Northern Ireland and linked well with the midfield on a couple of occasions.
However, he failed to inspire a comeback and on fifty-one minutes Scotland stung together a succession of fifteen passes, which led to Commons making it 3-0.  Davis lazily allowed Naismith to run past him off the ball and when he received possessio at the edge of the box, he was able to deftly play Commons through with his first touch.
With the match sewn up Levein decided to give a few players a rest and another few a run out, making a triple substitution.  Adam, Bardsley and Naismith were replaced by Barry Bannan, Mark Wilson and Robert Snodgrass, while Northern Ireland brought on Oliver Norwood for Davis.  All three Scotland substitutions were straight swaps which meant that they retained their shape.  Bannan slotted into the position vacated by Adam seamlessly, added yet more pace to the side and appeared to have the same range of passing as the Blackpool midfielder.
More substitutions meant that they game petered out with Scotland keeping possession yet playing without much urgency and Northern Ireland content to sit back and not embarrass themselves further.  One more chance fell the way of the losing side but a tame free header from Patterson was straight at McGregor.
Overall Scotland showed that they have a lot of small quick players at their disposal who can not only retain possession but can also cause defences problems.  Levein ordered his full-backs to push on and this is ultimately what caused Scotland to dominate the midfield area.  The movement and pace of the front five and the overlapping runs from Hutton and Bardsley (along with a poor defensive display from Northern Ireland) meant that they were able to turn the possession into chances.
This was an excellent performance from the Scots and with players like Darren Fletcher and Graeme Dorrans still to return, they sit in a promising position level with the Republic of Ireland on both points and goal difference.
Posted by Craig Cairns at 14:47