An injury time goal from Maurice Edu sent Rangers through to the last sixteen on away goals where they will face PSV Eindhoven.
Sporting dropped Andre Santos, Leonardo Grimi and Christiano de Oliveira from the side that lost 2-0 to Benfica on Monday, brining in Abel Ferreira, Alberto Zapater and Evaldo.  Joao Pereira and Yannick Djalo were fielded either side of Helder Postiga in attack, yet they hugged the touchline more and cut inside less than the wingers had in the first leg.  This was partly due to the fact that both started on their natural side - whereas in the first leg the wingers were inverted -and partly down to Rangers congesting the central areas.
Rangers resorted to the 5-4-1 that served them during their Champions League campaign, dropping Kyle Bartley from the defensive midfield role he took up in the Old Firm into central defence alongside Davie Weir and Madjid Bougherra.  Steven Whittaker took up a central midfield position with Steven Davis on the right, while John Fleck and Ricky Foster were brought in to replace Nikica Jelavic and Steven Naismith. 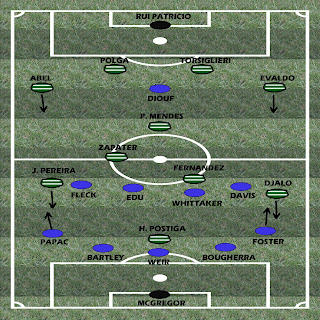 As expected, Rangers’ strategy was to sit in as deep as possible and restrict Sporting to few chances.  They refused to press the Sporting defence and midfield at all and this allowed Sporting to patiently build from the back.  Matias Fernandes would often drop deep to receive the ball and Pedro Mendes strolled in front of the back four playing short, simple passes.  Sporting looked to get their wingers on the ball but they failed to either find the space to run at the Rangers full-backs, cut inside or get in behind them as the Rangers back nine effectively stifled these areas.  Only when the match opened up later on did Djalo and Pereira finally find the space to make a mark on the match.
El Hadji Diouf started as the lone striker but failed as a target man.  He barely won any of the long balls aimed towards him and was ineffective in holding up the ball.  When Rangers did attempt to play the ball out on the ground rather than direct, they put some nice passing moves together, with Davis sometimes moving inside to form a central midfield three.
Rangers took the lead on twenty minutes through a Diouf header.  In possession, the Rangers back three would spread apart and the full-backs would move high up the pitch.  Bougherra passed the ball towards Foster who almost let it run past him but managed to touch it towards Davis just infield.  Neither Mendes nor Zapater picked up the run of Davis and he darted down the right wing before sending an inch perfect cross to the unmarked Diouf.  Anderson Polga was the closest to Diouf and failed to put him under any pressure but he was not helped by the poor positioning of right-back Abel.
Rangers’ formation could now do exactly what it was set up to do, protect a lead.  Sporting’s play became more hurried than it had been before the goal and they resorted to long range efforts on goal, chips over the Rangers defence and long diagonal balls that were for the most part wayward.
Even when you pack a defence in the way Rangers did, decent opposition will still get a chance to score and all their good work in the first half was undone by a Pedro Mendes strike minutes before half time.  Poor communication between Bartley and Weir meant that the ball fell for Postiga and his lay-off was finished expertly by the former Rangers midfielder from the edge of the box.
The second half began in a similar manner to the way the first had with Sporting patient in their build up and Rangers packing the defence.  It wasn’t until the sixty-fifth minute that Walter Smith abandoned his ultra-defensive approach and began to play more openly.  Unsurprisingly, given the fragility of Sporting in recent months, Rangers seemed capable of taking the game to their opponents and it wasn’t long until they made substitutions and moved to a more attacking formation.
Vladimir Weiss was a straight swap for Fleck on the left wing and Davie Weir was withdrawn for Lafferty.  Ten minutes later David Healy was brought on to replace Diouf and join Lafferty in attack in a 4-4-2 formation but before the Northern Ireland international could even touch the ball Rangers found themselves 2-1 down.
The danger seemed to be over when a combination of Bartley and Sasa Papac won the ball from Sporting substitute Carlos Saleiro.  Instead of clearing the danger, Papac allowed himself to be challenged and Pereira’s cross was headed in by Djalo, the smallest player on the pitch.
It seemed as if Rangers were out but some shocking Sporting defending allowed them to snatch an equaliser at the death.  Foster was able to easily cut inside Djalo and feed the ball through for Healy.  Three Rangers players were waiting at the back post to tap in the low cross but it was Edu who got the final touch.  In the lead up to the goal, not only did Evaldo fail to step out and provide extra cover for Djalo on Foster but no one followed Healy.  Furthermore, when Healy received the ball there were four Sporting players in the box and not one of them were either marking or goal-side of a Rangers player.
In the end, Walter Smith’s game plan of restricting Sporting early in the match and then scoring late on worked, even if not quite the way he intended it.  Two lapses in concentration seemed to have cost Rangers the tie but they were saved by some awful Sporting defending.  When Rangers did abandon their ultra-defensive approach they exposed the frailties of the Portuguese side and it’s a wonder they didn’t go for the kill earlier on in match.
Posted by Craig Cairns at 15:42