When asked post-match about how Motherwell were able to stop Celtic, Sky Sports pundit Neil McCann hit the nail on the head when pointing out that Motherwell had successfully nullified the threat from Celtic’s full-backs, especially the in-form Emilio Izaguirre.  Even with ten men against Rangers, Celtic were able to push the Honduran and Mark Wilson forward, effectively making them wingers, and feel confident that Daniel Majstorovic and Charlie Mulgrew would deal with a 2 v 1 situation at the back.  Against Motherwell it was a different story.  Chris Humphrey and Jamie Murphy both possess a lot of pace and both played wide and high up the pitch, meaning that, given their threat on the counter attack, they caused Wilson and Izaguirre to think twice before their forays into the Motherwell half.  Despite this, there were certain times in the match - towards the end of each half, for instance - where the Motherwell wingers focused on getting behind the ball with the rest of their teammates. 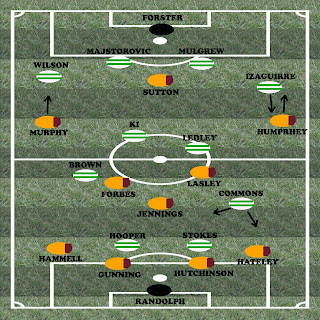 Motherwell started the match in a 4-5-1/4-3-3 formation with John Sutton leading the line.  Stephen Craigen was injured so on-loan Blackburn defender Gavin Gunning was moved into the centre of defence with Steven Hammell returning at left-back.  Francis Jeffers was left on the substitutes’ bench with Ross Forbes coming in to form a central midfield three with Keith Lasley and Steve Jennings.
With Beram Kayal suspended, Celtic lined up as expected.  Lennon opted for his favoured 4-4-2 formation although he altered the shape slightly.  Against Rangers and Dundee United recently, Kris Commons played as an out-and-out winger, whereas Scott Brown took up a more tucked in and less advanced role.  This time Commons started slightly more infield and Brown more advanced than usual.
Celtic surrendered a soft goal within two minutes but their frailties had been exposed prior to this when a Mulgrew error let Humphrey in.   Mulgrew was at fault again for the goal, this time waiting for Fraser Forster to come and collect the ball, allowing Sutton to sneak in between them and touch the ball past the Celtic goalkeeper before rolling the ball into an open goal.
Celtic’s response was to remain patient and to try to force openings but, by their own standards, they rarely threatened the Motherwell goal.  Motherwell’s midfield three of Lasley, Jennings and Forbes were excellent throughout and got behind the ball at every opportunity.  They offered terrific protection to the defence and never gave the Celtic midfield a moment’s peace, pressing high before returning into position.  Moreover, when the home side did hit on the counter attack, they moved the ball quickly and precisely and always seemed the more likely of the sides to score.
When it became clear that the initial game plan wasn’t working Lennon changed his side’s shape to a 4-3-1-2, moving Commons into the hole just behind the strikers and Brown into central midfield with Sung-Yeung Ki and Joe Ledley.  Admirably, Lennon is not afraid to make changes early in matches rather than stubbornly sticking to his pre-match tactics -see the recent Old Firm Scottish Cup clash for another example of this - but on this occasion Plan B was just as ineffective.  With 4-3-1-2 possessing such a narrow midfield, to be successful it requires the full-backs to provide width and, as noted, Motherwell successfully prevented this.
The second half took a similar pattern to that of the first.  Motherwell doubled their lead from the penalty spot through John Sutton then sat back and attempted to catch Celtic on the break.  Yet again, when Motherwell did get forward they put together some excellent passing moves and looked the more dangerous of the two sides.
Lennon had switched back to his original formation at half time but brought on Georgios Samaras and Efrain Juarez for Anthony Stokes and Mark Wilson within minutes of conceding the second goal.  The change at full-back was enforced due to injury although the change in attack was a tactical decision.  Celtic had started the match with two out-and-out strikers, both of whom were reluctant to drop deep and link with the midfield.  Samaras provided this option but with the Motherwell midfield now sitting deep and protecting their lead, he struggled to find the space to have an effect on the game.
As well as the midfield offering plenty of protection, Motherwell’s young centre-back pairing of Shaun Hutchinson and Gavin Gunning marked the Celtic strikers out of the game and won the physical battle when they faced up to long direct passes.  The pair only started together due to the absence of captain Stephen Craigen and have given their manager Stuart McCall a big decision to make when he names his side for Saturday’s trip to Inverness.
Celtic came close from a Mulgrew header and through a curling shot from Commons, which was saved superbly saved by Randolph in the Motherwell goal, but by this stage in the match Motherwell had almost everyone behind the ball and were restricting Celtic to very few chances.
In conclusion, Motherwell stopped the Celtic full-backs from having an impact on the match by fielding two pacey wingers high up the pitch against them.  Humphrey and Murphey not only kept Wilson and Izaguirre pinned back but they also defended from the front, pressing at every opportunity.  This is a luxury not afforded by many sides in the SPL, including Celtic’s next opponents Rangers.  Nevertheless, this was not the only reason for a Motherwell victory here.  They harassed the Celtic midfieldfrom start to finish and rarely afforded them time and space in dangerous areas.
Posted by Craig Cairns at 02:30