Accies not quite finished yet

Hamilton’s 1-0 defeat at Pittodrie on Tuesday coupled St Mirren’s 1-0 victory away to Motherwell last night means that the Lanarkshire club now sit eight points adrift at the bottom of the league, albeit with an extra game to play.
Even though their run of results have been nothing short of dire during the current SPL campaign - two league wins all season (none of them at home) and only eight points from their last twenty-two matches - on recent performances they appear not to be far away from beginning to pick up points and put some pressure on their closest relegation rivals.
With Hibernian’s recent form of three victories in their last three matches, the relegation fight looks set to be battled out between Hamilton and second bottom St Mirren, who will face each other twice before the season is out.  As mentioned, St Mirren managed a victory at Fir Park on Wednesday night, however, their form has also been poor and the only goal of that game came courtesy of a terrible playing surface which caused the ball to take an unnatural bounce, giving Motherwell goalkeeper Danny Randolph no chance.
Despite Hamilton’s poor season, they have actually been one of the most interesting teams tactically in recent weeks.  Billy Reid has persisted with three central defenders for most of the season but has recently moved away from a back five towards a 3-1-3-3 formation whilst in possession, 3-1-5-1 without it, similar to that used by Greece during their Euro 2004 success.  This is how Hamilton lined up against Motherwell on Saturday: 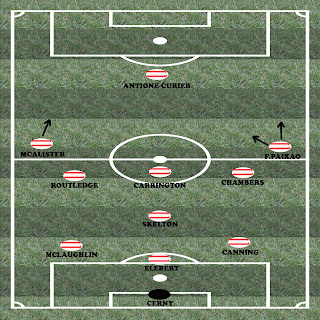