Rangers edged a hectic cup final to take the first silverware of the season.  The key to their victory was preventing Celtic from playing to their usual standard which, contrary to what many predicted, came from a good balance of attacking and defending along with some excellent pressing.
Kyle Bartley was ruled out because of an injury picked up against PSV on Thursday and Ricky Foster was cup-tied so Walter Smith brought in Steven Naismith and Nikica Jelavic and lined his side up 4-4-1-1/4-2-3-1, depending on whether in possession or not.  The switch from a five to a four-man defence was necessary due to the injury to Bartley, however, it could be argued that the more enterprising approach would have transpired regardless.
Celtic replaced Glenn Loovens with Thomas Rogne and Mark Wilson returned from suspension, as did Scott Brown, and they started ahead of Efrain Juarez and Ki Sung-Yeung.  Throughout the match they switched between their lopsided 4-4-2 and 4-2-2-2 but too many underperformances from too many players meant they failed to hit the same heights as they have done in recent months. 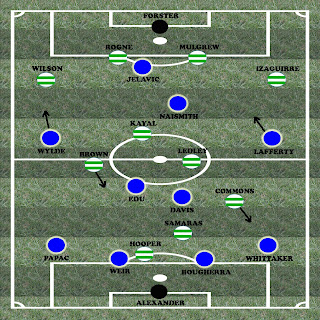