Not a great match but not as poor as the scoreline would suggest.  Hearts were poor in the first half and had goalkeeper Marian Kello to thank for a string of quality saves that denied a resurgent Aberdeen team.  A change in strategy from Hearts boss Jim Jefferies at half time meant that his side competed more in the second period, but neither side could break the deadlock.
Craig Brown made two changes from the 1-0 win over Hamilton.  Zander Diamond was unavailable so Andrew Considine started in the centre of defence and Derek Young was dropped to the bench to make way for club-captain, and former Hearts player, Paul Hartley.
Hearts were barely recognisable from the side that were lucky to take all three points at home to Dundee United with Lee Wallace, Ruben Palazuelos, David Obua, Ian Black and Suso Santana all missing for varying reasons.  Craig Thomson, Adrian Mrowiec, Ryan Stevenson, Andy Driver and David Templeton were the replacements. 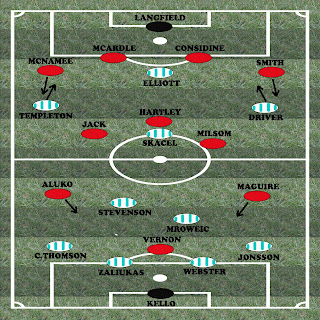