An injury time equaliser from Rory McArdle earned Aberdeen a replay at St Mirren Park.  The majority of the match was a scrappy, turgid affair which saw both teams struggle to find any sort of rhythm or create anything bordering on a decent chance.  It wasn’t until substitutions were introduced later in the second half that anything resembling a cup tie took place.
St Mirren boss Danny Lennon dropped Michael Higdon and Kenny McLean - both of whom would go on to have a massive impact on the match – from the 1-0 defeat to Rangers, with Craig Dargo and Darren McGregor restored to the line-up in a 3-5-2 formation.
Craig Brown lined-up his side 4-4-1-1 and made three changes from the 3-1 defeat at Tannadice on Monday.  Ryan Jack, Sone Aluko and Darren Young all missed out, with Josh Magennis, Chris Maguire and Nikola Vujadinovic preferred. 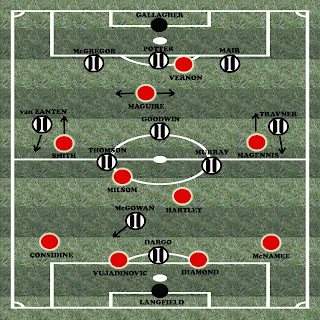 Lack of physical presence in St Mirren attack
Due to the set-up of the St Mirren side it was a surprise to see Higdon on the bench.  David van Zanten and Jure Travner provided width and played high up the pitch – the reason St Mirren’s formation was 3-5-2 and not 5-3-2 - and on the rare occasions when they did manage to work the ball into the final third and deliver a cross, there was such an obvious mismatch in height that the strategy failed.  The Aberdeen back four were all six foot plus and St Mirren’s two small strikers along with Hugh Murray and Steven Thomson, who often joined them in the box, were never able cause any problems in this regard.
Aberdeen edged the first ten minutes and it seemed for a while as if Paul Hartley and Robert Milsom would pull the strings in the centre of midfield.  Chris Maguire was given the freedom to drift deep and wide to link play but failed to get involved much after the initial stages.  This was partly down to the performance of Jim Goodwin, the best player on the pitch for the scrappy first hour, who patrolled the area in front of the back three.
Higdon and McLean change the match
After half time, the match continued in a similar vein until Higdon replaced the injured John Potter.  McGowan moved to the right of midfield, Travner and van Zanten returned to full-back and Higdon joined Dargo in attack in a 4-4-2.  The change brought about an immediate impact when Higdon controlled, turned and shot just wide from the edge of the area.  Shortly afterwards, McLean took to the field in place of Goodwin.
The substitutions swung the game in the home side’s favour for several reasons.  Firstly, and most obvious, was the physical presence of Higdon.  As already mentioned, St Mirren were struggled to hold up the ball and get someone on the end of their crosses.
Secondly, even though St Mirren were 4-4-2, once again Paul McGowan’s position was not easily defined - similar to the recent match against Hibernian.  Whereas McLean took up an orthodox left-sided midfield role, McGowan’s movement was such that he often formed a front three and looked to pick up the scraps from knock-downs and flick-ons.  Relatedly, Higdon’s presence meant that Dargo was now the second striker rather than the focal point of the attack, a role which suits him better.  He was now, like McGowan, free to drift around the space between the Aberdeen defence and attack and link play.
Lastly, the introduction of McLean brought more of a creative presence to the St Mirren midfield and the chances he, sometimes single-handedly, created should have been enough for St Mirren to progress to the semi-final.
Within a minute of coming on, the nineteen-year-old played a one-two with Higdon at the edge of the Aberdeen box and should have scored after finding himself one-on-one with the on-rushing Jamie Langfield.  The Aberdeen goalkeeper blocked the shot and the subsequent rebound that fell to Higdon.
The ball then crashed off the underside of the bar from a Higdon header but it wasn’t long until St Mirren had the lead.  Some decent play down the left involving Travner and McLean saw Dargo cut inside and cross towards the back post from deep.  Higdon volleyed the ball back across goal and McGowan escaped the attention of Vujadinovic to tap the ball into the net. 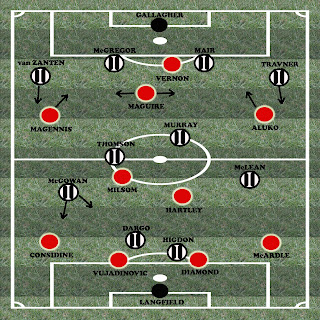 Aberdeen made some changes of their own, bringing on Nick Blackman for Scott Vernon in a straight swap, and Sone Aluko coming on for Steven Smith.  Aberdeen now resembled more of a 4-2-3-1 with inverted wingers, a tactic that worked well although failed to produce a goal against Hearts last month, but their best chances were strikes from around the edge of the St Mirren penalty area which failed to trouble Paul Gallacher much.
St Mirren poor finishing comes back to haunt them
After the goal, St Mirren carved out three opportunities that should have put the match beyond their opponents, all three of which involved McLean.  After missing a chance himself, on separate occasions he sent perfectly weighted through balls for Higdon and Dargo but both failed to take advantage of being through on the goalkeeper.


St Mirren were punished for their poor finishing in the ninety-third minute when McArdle pounced on a loose ball in the St Mirren box.  Paul Hartley’s free kick appeared to hit the arm of Murray but McArdle, who was the only Aberdeen player not to stop and claim for a penalty, stabbed the ball past Gallacher.
Conclusion
Overall it was a very poor match that was only brought to life when Danny Lennon made changes to his line-up.  Initially, van Zanten and Travner took up advanced wing-backs positions, however, the crosses that the pair managed to deliver lacked a target man.  Higdon’s introduction instantly gave St Mirren what they had been missing and culminated in the opening goal.  McLean had just as much of an impact, opening up the Aberdeen defence on a handful of occasions, but the subsequent chances were not taken advantage of.
Aberdeen’s main problem was creating opportunities.  Maguire and Vernon weren’t involved nearly enough, Milsom and Hartley were overrun in midfield - even though it initially appeared as if they would dominate - and their makeshift wingers failed to trouble St Mirren.
Craig Brown’s side have now scored an injury time goal in each of the three rounds of the Scottish Cup this season but none will be less deserved than this.  Despite their efforts, they were hardly threatening as an attacking force, yet managed to snatch an equaliser that now makes them favourites to progress to the semi final.
Posted by Craig Cairns at 10:30