Rangers tumbled out of the Europa League along with the other British representatives with a performance that involved a contrasting approach to each half.  PSV were not great, they didn’t need to be, but they did what they had to do to progress.
Kyle Hutton and El Hadji Diouf were dropped from the first leg with Greg Wylde and Sasa Papac brought in as replacements.  This meant 5-4-1 as usual for Rangers, with Wylde the main source of providing transitions from defence to attack and Kyle Lafferty preferred as the lone striker.  Neil Alexander was again favoured ahead of Allan McGregor in goal. 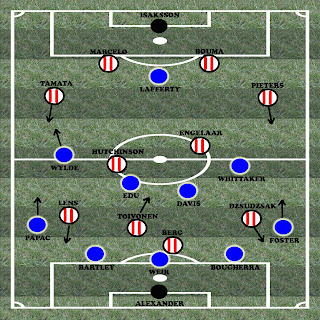