A few months ago, Hearts sat in a position that lead some to speculate whether or not they could mount a serious title challenge.  A run of eleven matches without defeat, including ten wins and eight clean sheets, saw them move well clear of Kilmarnock in fourth and placed them within touching distance of the Old Firm.
Towards the end of that fantastic run, Hearts lost striker Kevin Kyle to injury.  Even though not the most prolific – five of his seven SPL goals have come from the penalty spot – he was a vital part of the success of the 4-2-3-1 system that Jim Jefferies has employed for the majority of the current season.  Since then, Hearts have struggled to find an adequate replacement among their squad and the word coming out of Tynecastle now is that the Scotland international may miss the rest of the season.  This poses the question, has the time come for Jefferies to adopt a new formation?
For the opening ten matches of the current SPL campaign, Jefferies chose to line-up Hearts in an orthodox 4-4-2 but after some indifferent form, culminating in a 3-0 defeat at home to Kilmarnock, decided to ditch the formation in favour of something more modern.  For the subsequent match at Easter Road, Jefferies switched to a 4-2-3-1, the predominant formation at last year’s World Cup. 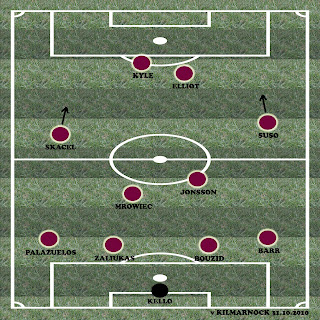 In that match, Kyle was deployed as the lone striker, with Stephen Elliott and David Templeton either side and Rudi Skacel the more advanced of a midfield three.  The shape included two holding midfielders, one to break up the opposition play - Adrian Mrowiec - and a ball player with fewer defensive responsibilities but who was still required to graft - Ian Black.  This base, combined with a strong defensive unit, gave the ‘3’ in the 4-2-3-1 the licence to support Kyle in attack. 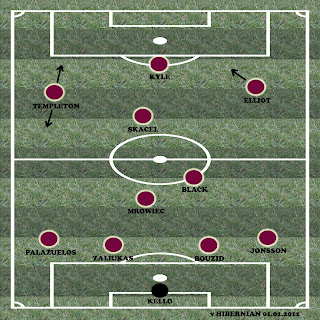 Even though Jefferies likes his sides to play passing football where possible, he is pragmatic enough to know that the rigours of the SPL, not to mention the temperamental condition of some of the playing surfaces, makes this method undesirable at times.  Thus, Jefferies is not afraid to instruct his side to switch to a more direct style, knowing that Kyle possesses the ability to hold the ball up in advanced areas.
After the recent draw away to Aberdeen, Jefferies admitted that “Aberdeen adapted to the type of surface” and that “this was a day for Kevin Kyle”, which was his way of conceding that he would have liked the option of hitting long, direct passes towards a target man in order for him to hold the ball up and bring midfield runners into play.  He wins most of the aerial and physical battles he faces and, further, is able to occupy two centre backs in a way that negates the numerical disadvantage Hearts have in this area of the pitch.  This was the key to Jefferies’s system during the height of its success.
Though brought to the club under the pretence that he could potentially be the twenty-goal-a-season striker that Hearts have sorely lacked for several years, his main attribute has been to hold up the ball and bring the likes of Skacel, and Templeton into play.  A perfect example of this came in Hearts’ 2-0 victory at Easter Road on New Year’s Day, a match in which Kyle consistently pulled central defenders out of position, held the ball up effectively and created opportunities for his teammates.
Hearts have other options in these attacking midfield positions, not least Stephen Elliott who has spent a large portion of the season on the right wing, yet often drifts inside during matches to form a classic big-man-little-man partnership with Kyle in attack.  The best of Elliott has been from this position and the reason his form has dipped since Kyle’s absence is not so much that he has played as the lone striker, a role that doesn’t suit him, but more that he has not had Kyle alongside him to feed off.
It is not just Stephen Elliot that has failed to fill the space vacated by Kyle.  Midfielder David Obua was initially chosen, solely on the height he possesses, but was predictably out-muscled by Frazer Wright and Mohammed Sissoko against Kilmarnock at Rugby Park.  The following match against Rangers saw another midfielder, this time Ryan Stevenson, chosen.  Again height was a factor but Jefferies this time hoped that his bulky frame could help in replicating Kyle.  Even though Stevenson scored in this particular fixture, he struggled to get involved in the match and it wasn’t until Jefferies moved him back into the midfield of a 4-2-2-2 formation that he netted the winner. 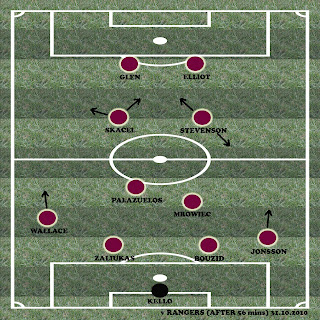 Gary Glen and Callum Elliot are two others who have tried their luck in the position.  In terms of attributes, Callum Elliot is perhaps the most suited of all possible replacements but has failed to regain his early season form in his recent handful of appearances.
Injuries in other areas of the field, such as central midfield and full-back, have no doubt also contributed to the recent dip in form and it could also be argued that Hearts have become predicable in their strategy.  With Kyle missing, it is down to other key dangermen to score and create but teams have recently shown that doubling up on Templeton and man-marking Skacel out of the game makes the Jambos a far less potent attacking threat.
This point adds yet more weight to the argument that Jefferies should seek an alternative to his current system.  Even with all key players available, opposition managers soon begin to develop methods of countering the formations and strategies of in-form sides, especially given that it is possible for teams to face each other up to seven times a season.
A return to the standard British 4-4-2 is not desirable.  Not only was it unsuccessful when the current campaign was in its early stages, but also because the formation leaves a shortfall in midfield when lining-up against the likes of a 4-5-1, 4-3-3 or similar variant.  However, lacking an adequate replacement target man, Jefferies may now need to consider switching to a two-striker formation for the remainder of the season.
The narrow 4-2-2-2 that Jefferies switched to during the home win over Rangers earlier in the season is one option, as by removing the wingers it allows the team to play with two strikers but without leaving the side overmanned in the centre of the pitch.
Whatever Jefferies decides to do, he must come up with a way of compensating for the periodic absence of the injury-prone Kyle, not just for the current season but for seasons to come.
Posted by Craig Cairns at 05:16