(Apologies if there are any mistakes. The end of this was rushed and I had no time to proof read it. Must return to work now.)

Another good result for Walter Smith’s Rangers in Europe, although they were let off by some poor PSV finishing.  Rangers had spells where they were not as ultra-defensive as their formation would suggest, however, the home side still managed to work pockets of space and almost take full advantage.
Rangers dropped David Healy and John Fleck from their narrow 1-0 win over St Mirren, bringing in Kyle Hutton and Kyle Lafferty and lining up 5-4-1 as expected.  What wasn’t quite as predicable was that Lafferty would take up a left midfield role, with El Hadji Diouf the lone striker.  The Senegalese forward was deployed in the same role away to Sporting Lisbon recently yet, despite his goal, struggled as a target man.  More on this shortly.
PSV stuck with the same starting eleven that drew 0-0 at home to Ajax in their most recent league match, which was also the same eleven that lined-up in the second leg against Lille in the previous round of the Europa Cup.  As usual they lined-up 4-2-3-1. 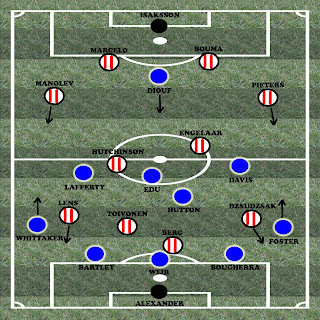 Strategies
The initial strategy from Rangers was to sit deep and deny the PSV dangermen space, especially in central areas.  No sooner than one minute thirty seconds in and Rangers has eleven players behind the ball in their own half, not one of the within fifteen yards of the halfway line.  Notably, the Rangers midfield was very narrow.
The PSV wingers began by hugging the touchline and were offered support by the advancing full-back.  Whether this tactic was out of strategy or necessity was unclear – Rangers packed the central areas - but most of their play was focused down the wings after patient build up, mostly through captain Orlando Englaar.
This didn’t last long, however, and after five minutes played PSV suddenly increased the tempo and play more direct.  They switched between patient build up and moving the ball quickly into dangerous areas throughout the match.
Even though it appeared that we were in for ninety minutes of PSV pressure and Rangers resilient defending, there were spells when the away side managed to relieve pressure by enjoying some spells of possession and moving bodies further up the pitch.  While Kyle Hutton remained in his position just in front of the defence, the other three midfielders, along with full-backs Ricky Foster and Steven Whittaker, were not afraid to push on further up the pitch.
In saying this, after losing the ball Rangers would quickly return to their ultra-defensive position and spent the majority of the match like this.
Diouf as a false nine
The most interesting part of Rangers’ strategy was that even though Diouf found himself as the lone striker, Rangers resisted hitting long direct balls towards him.  He took up the same position against Sporting Lisbon last month, barely won a header (admittedly he scored a header in that match, however, this a free header from an angled cross) and failed miserably in holding up the ball.
This time he was deployed as a false nine, which meant that although his starting position was that of a striker, he would often drop deep to receive the ball and attempt to bring the other Rangers players into play this way.
One of the purposes of this tactic is to pull one of the central defenders out of position, leaving space to be exploited in behind.  This failed for two reasons.  Firstly, even though Diouf did manage to receive the ball at feet in deep positions, sometimes picking a pass, neither of the PSV centre back followed him, they instead left it to Engelaar and Atiba Hutchinson to pick him up.  Secondly, even if one of the centre-backs had followed him, there were no Rangers midfielders high enough up the pitch to take advantage due to their deep starting positions.
Slight change by Rutten
Halfway through the first half, PSV manager Fred Rutten changed the shape of his side slightly, moving Jermain Lens and Balazs Dzsudzsak slightly more infield.  Even though they still would attempt to pull wide at times, they change drew the Rangers full-backs into more narrow positions, allowing Erik Pieters and Stanislav Manolev to overlap.
On the occasions when the Rangers full-backs remained wide and picked up the advancing PSV full-backs, this meant that there times when one of the back three of Rangers were required to ditch their position and close down either Lens or Dzsudzsak, leaving space in behind.
The tweak in formation afforded players like Lens, Dzsudzsak and Ola Toivonen more space to exploit, especially when the Rangers midfielder moved higher up the pitch, and they almost took advantage. On three separate occasions, Toivonen found space between the lines, drew Rangers defenders out of positions and found Marcus Berg in space, but the on-loan Hamburg striker wasted all three, shooting wide on one occasion and taking an awful touch on another.
Second half
Substitutions were made by both sides during the second half but all were straight swaps and the game continued in much the same way as the first.  Towards the end of the first half, Walter Smith switched the positions of Steven Davis and Maurice Edu which gave Rangers a bit more creativity on the centre of the pitch, but again it failed to change the outcome of the match.
Both sides also had the chance to snatch a winner from set-pieces.  Bartley saw his header saved well by Andreas Isaksson, whereas Marcelo missed the best opportunity of the match when he headed wide after finding himself free at the back post.
Conclusion
Rangers’ tactic - that has served them well in this campaign, their Champions League campaign and in the Uefa Cup three years ago – of sitting back and restricting the chances of their opponents once again worked well.  Playing the first leg away is something that Walter Smith has had to do much in the last few season – his success in 2008, and this season, has been through keeping it tight at home in the first leg then snatching an away goal in the second – and it will be interesting to see how attacking his side are at Ibrox given that an away goal could easily end things for them.
PSV had numerous chances, although not in terms of shots on target, despite the ultra-defensive approach of their opponents.  The three players just behind the striker all seem to have the potential to hurt teams that afford them time and space, something they may enjoy a lot more of in the second leg.
Posted by Craig Cairns at 02:54