An open ninety minutes at Tynecastle yesterday which saw Kilmarnock rewarded for their patient approach.  Hearts dominated possession for large spells but failed to capitalise.
Jim Jefferies lined-up his Hearts side 4-2-3-1 as usual and made three changes from the 0-0 draw with Aberdeen last week, bringing in Calum Elliot, Suso Santana and Ismael Bouzid for Stephen Elliot, Andy Driver and the injured Andy Webster.   Kilmarnock also made three changes from their previous match, a 2-0 win over St Mirren.  Garry Hay, Mehdi Taouil and Mohammed Sissoko all missed out and were replaced by Tim Clancy, David Silva and Liam Kelly in a 4-1-4-1 formation. 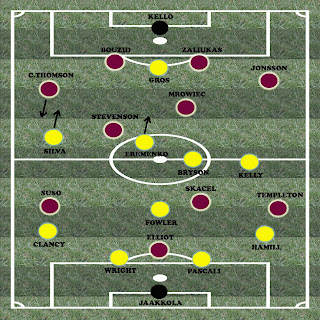 Quick, direct start from Hearts
Of the two sides, it was Hearts who made the better start.  Their strategy was to move the ball quickly and directly towards David Templeton and Suso on either wing and put dangerous balls into the box.  Suso was offered terrific support from Craig Thomson – who switched positions with Eggert Jonsson from last week– and he created the better of the Hearts chances through his crosses, including a Templeton header which smashed the underside of the bar.
Calum Elliot also made an impressive start to the match, he linked-up well and brought the Hearts midfield runners into play.  Despite his bright start, Elliot drifted out of the match as the game wore on and was eventually replaced mid-way through the second half.
Man-marking Rudi Skacel out of the game has been a common tactic employed against Hearts in recent weeks and today was no different.  James Fowler sat deep behind the other Kilmarnock midfielders and followed Skacel’s movement for the duration of the match.  As a consequence, Skacel failed to make an impact on the game.
Kilmarnock’s patience pays off
Mixu Paatelainen’s strategy was to get plenty men behind the ball, without sitting too deep, press relatively high up the pitch and break quickly when the ball was won.  A few good counterattacking situations broke down due to some sloppy passing but Kilmarnock were content to remain patient and disciplined, knowing that they would enjoy spells of possession at some time in the match.
When Kilmarnock did come more into the game, they dominated the midfield area with a short passing game.  William Gros was willing to drop deep and get involved but it was Eremenko who was beginning to pull the strings.  Ryan Stevenson and Adrian Mrowiec took turns to pick up the Ukrainian but with his movement, he was able to evade their attention and receive the ball in space.
Kilmarnock’s two goals from left-hand side
Kilmarnock began the second half in much the same way they ended the first but this time they managed to create and finish chances.  The first came on fifty minutes when David Silva collected the ball just inside the Hearts half, intercepting a poor pass from Craig Thomson.  He made a diagonal run, evading the challenge of the full-back who was attempting to atone for his error.  A quick change of pace took him past Marius Zaliukas and the Portuguese winger slotted the ball coolly into the bottom corner.
It was a well taken goal by Silva, however, Hearts will be disappointed by how easily they surrendered possession and by the lack of any real challenge following that.
Within six minutes it was 2-0 courtesy of an Eremenko strike.  After collecting a throw-in, Eremenko was afforded the space to turn and link up with Silva and Gros down the left.  None of the Hearts players followed Eremenko when he collected the throw, nor did they when he ran into the box and collected the return from his one-two with Gros.  Eremenko then found himself with a clear sight of goal only eight yards out and fired an unstoppable strike past the rooted Marian Kello.
Hearts change in shape does nothing to change outcome
With a comfortable 2-0 lead, Kilmarnock’s defensive line was now deeper than it had been in the whole match, with the midfield not much further forward.  Jim Jefferies decided a change was in order and withdrew Stevenson for Stephen Elliot, moving to a 4-1-3-2.
A look at the Hearts substitutes on Saturday would show that they currently have several players missing and Jefferies is not blessed with game-changing options.  Gary Glen was also introduced but the changes did little to affect the match and even though Hearts enjoyed most of the possession in the closing stages, they failed to regularly get the ball into dangerous areas and break down a packed Kilmarnock defence.
A red card for Eremenko also did little to affect the outcome and Hearts were reduced to crossing from deep positions and long-range strikes that were either off target or else easily dealt with by Anssi Jaakkola.
Conclusion
Mixu Pataalainen’s cautious and patient approach, plus the assured manner in which they took their chances, was the main factor in Kilmarnock leaving Tynecastle with all three points.  Eremenko, Silva and Gros were instrumental in the Kilmarnock victory but overall it was a very disciplined team performance.
Hearts played reasonably well despite the scoreline and on another day would have taken their chances and won the match.  The most worrying thing for Jim Jefferies is the amount of key players missing at the moment.  He desperately lacks the targetman that his style of 4-2-3-1 requires and has seen Stephen Elliott, David Obua and now Calum Elliot struggle to fill the position vacated by Kyle.
Posted by Craig Cairns at 00:13