Two excellent strikes from Kris Commons ensured a comfortable win for Celtic.  Defeat for Hamilton now leaves them with no wins in fifteen SPL matches.
Fraser Forster returned from suspension, replacing Lukas Zaluska in goal for Celtic and Antony Stokes began in attack due to the absence of Gary Hooper through injury.  The rest of their line-up was as expected. 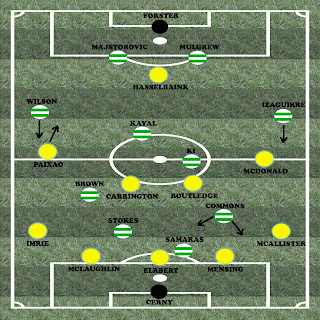 In recent months, Celtic have lined-up in a lopsided 4-4-2 with Kris Commons as an out-and-out winger and Scott Brown playing more like a central midfielder on the opposite side.  In the recent Old Firm match, however, Brown seemed to have taken up a slightly more advanced role and Commons spent most of the match more infield than usual.  This was in evidence again yesterday and as a result Celtic’s shape was more 4-2-2-2.  This meant that Celtic’s midfield was quite narrow and, as usual, the full-backs provided width and spent most of the match in the Hamilton half, leaving the two central defenders to pick up Nigel Hasselbaink.
Hamilton dropped Mickael Antoine-Curier and Damien Casalinuovo to the bench from the 2-1 home defeat to Hibernian, brought in Jim McAllister and Nigel Hasselbaink, and lined-up in an ultra-defensive 5-4-1.  Dougie Imrie took up an unusual wing-back role and Hasselbaink was deployed as a lone-striker.  Predictably, Billy Reid’s strategy was to stifle as many Celtic attacks as possible and attempt to hit on the counter.

Celtic’s fluid attacking front five
As well as the slight change in shape, Celtic’s formation was more fluid than it had been in most of their recent matches and reminiscent of the 2-2 draw at Ibrox in which Celtic played the majority of the match with four interchanging central midfielders.
In the first half against Hamilton, the strikers took turns at dropping deep and wide and Commons would drift across the pitch behind the strikers.  As well as this, Scott Brown and Sung-Yeung Ki would often take up various positions higher up the field and all five would interchange frequently.  Beram Kayal was the only midfielder who stuck to a rigid position and his breaking up of Hamilton attacks and simple passing gave those in front of him the licence to move around freely.
With the score still at 0-0 and Celtic struggling to create, a change in shape was inevitable and Celtic moved Commons to the opposite wing with Antony Stokes coming left and Brown now an orthodox central midfielder.  Their formation was now more of a 4-3-3 but the shape remained fluid. 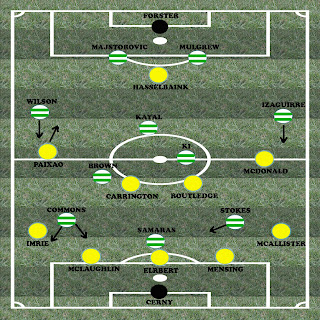 Celtic dominate possession, few clear-cut chances
A fluid midfield can cause problems for the opposing side by making the defensive players unsure as to who they should be marking but Hamilton’s set up was so defensive they effectively stifled the Celtic attacks.  A back three was flanked by Dougie Imrie and Jim McAllister at wing-back with a deep-lying midfield four just in front.  This allowed Hamilton to double up on the advancing pair Mark Wilson and Emilio Izaguirre, while retaining several bodies in central areas.
Inevitably, Celtic dominated possession but in the first half they didn’t create too much in the way of clear-cut opportunities.  Hamilton had one or two half-chances of their own and looked to be heading into the break with a deserved 0-0 before Commons opened the scoring.  A Celtic corner was cleared only as far as just outside the box and Commons was there to collect the ball and finish with style.  For all Celtic’s possession, it took a tremendous swerving strike following a set-piece to provide the breakthrough.
Elebert mistake ends Hamilton challenge
A substitution by either side did nothing to change the shape or strategy of the teams and within eight minutes of the restart a David Elebert mistake had gifted Commons a second goal, ending the match as a contest.  The blame may partly lie at the feet of Mark McLaughlin for allowing the ball to run past him but it was a poor decision from Elebert to play a pass into such a dangerous position. It was another emphatic finish from the Scotland international but he only had the goalkeeper to beat.
Billy Reid responded by bringing on Ali Crawford and Grant Gillespie for Mark Carrington and Flavio Paixao.  Crawford added an extra dimension to Hamilton’s play, showing his ability to run with the ball and beat players.  In fact, even though the nineteen-year-old was only on the pitch for around half an hour, he was the stand-out performer for the away side.
Hamilton’s play became a little more enterprising but they failed to create any real chances.  This unavoidably left more gaps at the back and Celtic will feel they should have increased their lead.
Conclusion
Hamilton were predictable in lining up with a back five, a bank of four in front and then an isolated front man.  Their strategy was then to sit back and hope that players like Imrie, McAllister and Jon Routledge (another impressive-looking youngster) could create on the counter attack.  The trouble was that they rarely broke with the numbers or quality that would trouble the Celtic defence.
Neil Lennon began his touchline suspension for this match but, nonetheless, when things weren’t quite going according to plan the decision (however by) was made to change the shape to a  4-3-3.  The most interesting point to note about Celtic, however, is their evolving formation.  They are now moving away from the lopsided 4-4-2 that has destroyed so many teams during their fantastic run and are now, starting matches at least, with Commons and Brown as the third band in a 4-2-2-2, both playing narrow and being persistently overlapped by Wilson and Izaguirre.
Posted by Craig Cairns at 13:20