*This article originally appeared in the online League Cup Final Preview Magazine. Please click the embedded link to see and/or download the magazine in full.

Team News
With Daniel Majstorovic ruled out for up to eight weeks, manager Neil Lennon may opt for the experience of Glenn Loovens over Thomas Rogne.  Georgios Samaras doesn’t get many starts for Celtic these days but has started in the last three Old Firm matches, meaning he will likely form a front two with Gary Hooper in attack.  Beram Kayal, Kris Commons and Scott Brown, who returns from suspension, will form the midfield along with either Ki Sung-Yeung or Joe Ledley.  It will be interesting to see whether Lennon decides to go with playmaker Ki, who can dictate the tempo, or whether he predicts a tough midfield battle and favours the more industrious Ledley.  Ledley may just edge it due to his brace against Inverness on Wednesday but either way Celtic should begin with their lopsided 4-4-2 which over the last month has evolved into more of a 4-2-2-2, but more on that below.
For Rangers, Steven Naismith is back from injury but may not be ready to start.  Against Kilmarnock on Sunday, Walter Smith lined-up Rangers in a 5-3-2/3-5-2 formation with Diouf just off Jelavic in attack, but has favoured 5-4-1 against better opposition.  Bougherra, Weir and Bartley will no doubt form the back three with Ricky Foster and Sasa Papac at wing-back.  Smith must then chose between the two formations.  Given Diouf’s tendency to drift away from his starting position, and the way Izaguirre exploited this when Celtic ran out 3-0 winners last month, Smith has a decision to make regarding how he fits the temperamental Senegalese forward into his line-up, if at all. 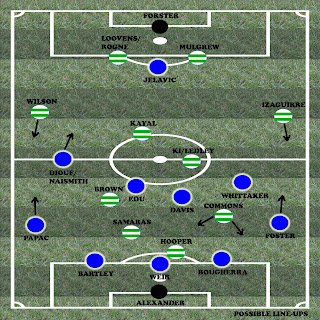