A decent match in which Peter Houston’s men played some quality football.  Aberdeen rarely looked comfortable in the match and Craig Brown will be disappointed with his team's efforts.  After talk of a possible top six finish, Aberdeen now find themselves slipping back down the table, without a win in their last three.
Dundee United were once again forced to change their back four, bringing in Timothy van der Meulen for Paul Dixon.  Stuart Armstrong was dropped to the bench with Prince Bauben restored to the starting line-up after his goal in Inverness on Tuesday.  This meant that United stuck with their 4-5-1/4-3-3, with Craig Conway and Danny Swanson flanking David Goodwillie in attack.
Rory McArdle and Nick Blackman were the players to miss out for Aberdeen, both of them dropping to the bench and being replaced by Zander Diamond and Derek Young.  Craig Brown has favoured a 4-4-2 in most matches since taking over as manager at Pittodrie, preferring a 4-5-1 against the better sides.  It was a mark of respect that he decided to drop Blackman and go with Scott Vernon as a lone striker.  Sone Aluko was chosen to provide support from the left of midfield with Ryan Jack deployed in a more conservative role on the right. 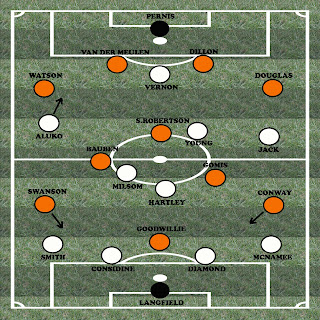